It’s already stressful to owe money to a creditor. What’s worse is having your wages garnished. Your finances will be severely strained if this happens. Fortunately, under Missouri state law, you, as a debtor, have the option to alleviate the hardship of wage garnishment. It is best to consult with an expert wage garnishment attorney in Missouri before the burden arrives.

Doyel Law Firm is known as one of the best in Missouri. With substantial legal experience and competencies, our firm is dedicated to assisting you in overcoming the debt trap. If your wages are going to be garnished, surfing the internet will only make the situation worse. Contact us right now if you need the assistance of a skilled bankruptcy attorney.

Why do I need a Wage Garnishment Attorney in Missouri? If your wages are about to be garnished by a creditor, you should take it seriously. Once pursued, it will have an effect on your standard of living. When looking for the ideal lawyer, you should consider their qualities. If you’re wondering what traits a wage garnishment attorney should have, take note of the following:

Chances are, you won’t be able to sleep soundly at night. Your attorney should be able to put your mind at ease by being available whenever you have concerns about the case and clearly explaining every option to you.

Doyel Law possesses all of the best attributes. Mike Doyel attended one of the nation’s finest law schools, the University of Missouri-St. Louis. Our commitment is to get the best results as efficiently and decisively as possible. We are always ready to take your call, and we will make the process as simple and seamless as possible for you to get things done quickly. If you’re ready, schedule an appointment now!

What is Wage Garnishment?

Wage garnishment, also known as “wage attachment,” is a court order authorizing your employer to take your wages and pay them to the creditor. Wage garnishment happens when you have a debt that you have failed to settle within a reasonable time frame or pursuant to what you have agreed upon.

It is a legal action taken by the creditor in which the latter petitions the court for an order to be issued. Generally, the rules of the legal process are enshrined in Chapter 525 of the Missouri statute; and Supreme Court Rules. However, insofar as wage garnishment laws are concerned, they are stated in federal laws.

Limitations on Garnishment Statute in Missouri

In general, Missouri’s garnishment statute has a limitation of about 5-10 years. It will still, however, depend on the type of debt. After this period, the creditor may no longer file a lawsuit against you.

Nevertheless, keep in mind that even if the statute of limitations has expired. If you get a court summons for an unsecured debt that you know is time-barred, you should seek legal help immediately from an attorney.

The period set forth by the Missouri law for wage garnishments ranges from 30 to 180 days. This implies that creditors and collection agencies have to maintain garnishments and renew them once the time period is about to end. This is for the purpose of not losing priority to other creditors. However, this rule of Missouri law was amended and it allowed for continuous garnishments.

As enshrined in the Missouri statutes, continuous garnishment is defined in Section 525.030 RSMo. The garnishment of wages has no timetable and keeps in effect until the decision is paid in full or the employee-employer relationship is ended, either comes first.

Earnings or wages, as defined by the Mo. S. Ct. R. 90.01. Section 525.030, is the compensation payable or paid for the services, whether denominated as commission, salary, bonus, or among others. It entails periodical payments in accordance with the pension or retirement benefits. § 525.030.2(5) RSMo.

The Missouri laws on garnishment identified which properties are included in the categories. The properties subject to wage garnishment are money owed, personal property, consumer credit, medical bills, bonds, paycheck, notes, choices in action, credit card debt, and others.

However, this exempts the assets of the debtors on reserve with a bank account or financial institution in an account in which all funds are: electronically deposited on a recurring basis; and identifiable funds as not included from garnishment under 513.430.1(10)(a), (b), or (c) RSMo or falls under the exemptions of Title 31 C.F.R. Part 212.

How to Protect Your Wages From Garnishment

You can exclude a portion of your salary after receiving a notice of wage garnishment order from a competent court ruling. To do so, you must file an exemption claim in order to raise the objection. The method that you must take will always be determined by the sort of consumer debt that you have. You may also file bankruptcy other than to make an exemption claim. The exemption laws of Missouri will specify how much wages you can retain.

Restrictions on Job Termination Due to Wage Garnishments

From an employer’s standpoint, it may be inconvenient for them to comply with your wage garnishment. (15 U.S.C. § 1674) They are also obliged to sign some documents and paperwork. That’s why some employers terminate their employees. Under the protection act, employers are not allowed to do that.

As an employee, having a wage garnishment is not a crime. It is unquestionably illegal to fire an employee only because of a single writ of garnishment. (Mo. Rev. Stat. § 525.030(5), § 525.030(6)) The federal law is clear in protecting you in these instances.

Wage is incredibly crucial as an employee for your living expenses, especially when you are the head of the household. If your wages are set to be garnished by the creditor, your financial hardship will be exacerbated. To prevent this or negotiate the amount of your pay garnishment, contact an experienced Missouri wage garnishment attorney. It should specialize in bankruptcy, be skilled, and be available to assist you at any time. An experienced wage garnishment lawyer can examine your case and provide helpful recommendations on what steps you should take.

Other than specializing in Chapter 7 and Chapter 13 bankruptcy, Doyel Law also handles estate planning matters. If you or someone you know is now drowning in unpaid debt, we can assist you in getting back on track. Our commitment is to deliver the most satisfactory outcomes of debt relief for you as quickly and effectively as possible. Schedule a free consultation now!

Solve Your Debt Problems! Call Us

Facing the threat of foreclosure?

Stop foreclosure! Our foreclosure attorneys in Missouri can help you save your home! Tell us more about your situation. 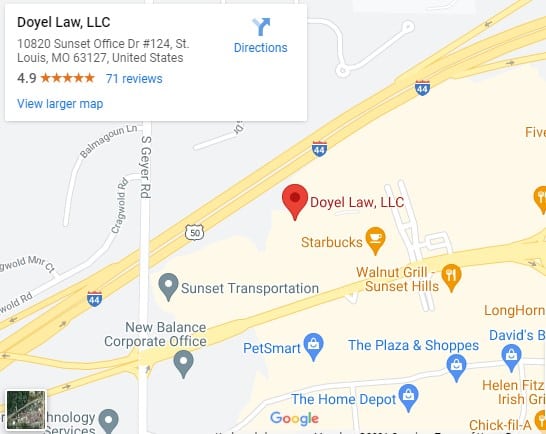 Get Your FREE Book